We had a good run, me and the TCPA.

But this may be my last post about the statute that fundamentally changed Texas litigation for a short, but exhilarating, time. The reasons will become apparent.

This is my tenth and possibly last blog post on the Texas Citizens Participation Act. My loyal Fivers will remember these great party jams:

A SLAPP in the Face to Texas Trade Secrets Lawsuits, or Much Ado About Nothing? (7/3/17)

Legislation Aims to Reign in the TCPA, Protect Non-Compete Suits (3/4/19)

Turn Out the Lights, the Party’s Over: Texas Legislature Takes All the Fun Out of the TCPA (5/28/19)

You might say whenever I’ve needed a hit, I’ve gone to the TCPA. It’s like a Beach Boys song about cars. Or Trump talking about Hillary’s emails.

And you can gather from my headlines the arc of the TCPA since its enactment in 2011.

From 2011-2017, it was an important but relatively obscure “anti-SLAPP” statute.

Then litigators figured something out. The definitions in the TCPA are so broad, that if applied literally, they cover almost any kind of lawsuit. Especially a departing employee suit, the focus of my law practice.

In 2017, the Austin Court of Appeals held in Elite Auto Body that the statute applied to a claim for misappropriation of trade secrets. The court reasoned that the Texas Supreme Court has mandated application of the “plain meaning” of the statute. Other Courts of Appeals—including Houston and Tyler—followed in 2018. And the Austin court continued to apply the statute broadly and literally in cases like Craig v. Tejas Promotions and Grant v. Pivot Technology.

But cracks in this plain-meaning foundation soon started to form.

The Houston Court of Appeals issued the Gaskamp opinion in late 2018. The majority said the TCPA applied to the allegation that a group of employees conspired to take their employer’s confidential information and trade secrets to a competing venture. But Justice Jennings wrote a concurring opinion arguing that this was a misguided misapplication of the doctrine of textualism. The TCPA was never intended to apply to any of the claims in the case, he wrote, and applying the literal meaning of the statute’s broad definitions would lead to “absurd or nonsensical results.”

Picking up where Justice Jennings left off, the Metroplex courts started to reign in the TCPA. The Fort Worth Court of Appeals went the textualist route in Kawcak, diving deep into several dictionaries to support its holding that a business conspiracy between only two people is not a “common interest” as defined in the statute.

Then the Dallas Court of Appeals got to the same place through a different route—blowing open the “absurd results” escape hatch. It held in Dyer that it would be nonsensical and absurd to apply the TCPA’s literally to claims against departing employees that do not implicate public participation.

This led to a slew of Dallas opinions holding that the TCPA does not apply to essentially private business disputes: 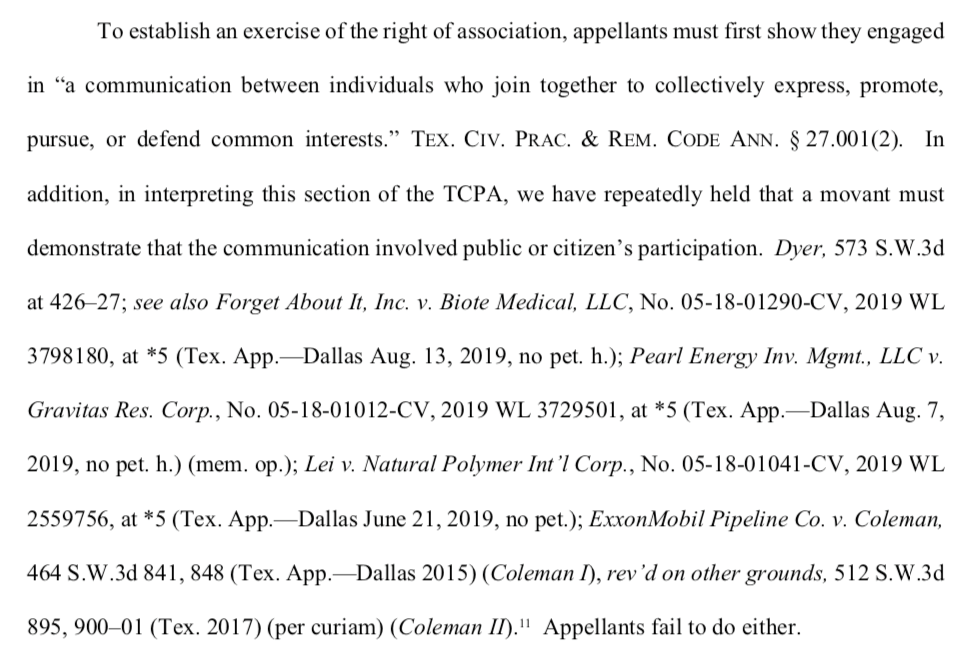 Dallas Court of Appeals opinions restricting the TCPA have been coming out more often than those “Fast and Furious” movies.

Then it was the legislature’s turn. House Bill 2730 significantly restricted the scope of the TCPA, in two ways. First, it narrowed the TCPA’s definitions of “right of free speech” and “right of association.” Second, it exempted several types of claims, including most non-compete, trade secret, and common-law fraud claims.

The next carve-back of the TCPA came from an unlikely source: the U.S. Court of Appeals for the Fifth Circuit. It held in Klocke v. Watson that the TCPA does not apply in federal court.

Now we await the Texas Supreme Court’s decision in Pivot Technology v. Grant, which may clarify the scope of the “right of association” and could also address whether the Texas non-compete statute preempts the TCPA. But those issues will become largely moot for other cases, due to House Bill 2730.

So where does this leave us? Many questions remain unanswered, especially issues of procedure.

And we don’t know how Texas courts will apply the statute’s new definitions of free speech and association.

But we do know the TCPA generally does not apply to the following kinds of cases, among others:

I say the TCPA “generally” does not apply to these types of cases because there are exceptions, so be sure to read the statute carefully. Still, these categories cover a lot of real estate.

For my practice, which focuses on non-compete and trade secret disputes, it doesn’t leave much room for filing a TCPA motion to dismiss. The typical departing employee suit includes a claim that a former employee breached a non-compete, or misappropriated trade secrets, or both. Starting September 1, the TCPA won’t apply to those claims.

You might still have a shot at a TCPA motion against other claims. Breach of fiduciary duty is another common cause of action in a departing employee suit. Maybe you can file a motion to dismiss that claim alone–and if you lose still get a stay of the whole case during your interlocutory appeal (?).

But you’ll have to fit the square peg of breach of fiduciary duty into the round holes of “right of free speech” and “right of association,” which are now smaller thanks to HB 2730.

And breach of fiduciary duty is already a shrinking cause of action in departing employee cases. That’s because a common-law fiduciary duty claim that is based on misappropriation of trade secrets is preempted by the Texas Uniform Trade Secrets Act (as I explained here).

And if you’re in federal court? Forget about it. You’ve been Klocked.

So for now, I’m breaking up with the TCPA. I’m sorry, TCPA, but I’m just not that into you anymore.

Don’t take it too hard. We’ll always have Austin.

Zach Wolfe (zach@zachwolfelaw.com) is a Texas trial lawyer who handles non-compete and trade secret litigation at his firm Zach Wolfe Law Firm. Follow @zachwolfelaw on Twitter to keep up with his latest shenanigans.