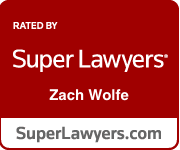 Zach Wolfe (zach@zachwolfelaw.com) is a trial lawyer who handles non-compete and trade secret matters for clients throughout the great State of Texas. He publishes the award-winning blog Five Minute Law and hosts the YouTube channel That Non-Compete Lawyer.

Thomson Reuters named Zach a Texas Super Lawyer® for Business Litigation in 2020 and 2021, an honor reserved for fewer than five percent of Texas lawyers. He is rated AV (Preeminent) by Martindale-Hubbell.

Zach is admitted to practice in all state and federal courts in Texas, as well as the Fifth Circuit Court of Appeals and the United States Supreme Court. He has never actually had a case in SCOTUS, but you never know.

Zach has been selected by his peers for inclusion in Texas Super Lawyers, Business Litigation in 2020 and 2021 and has achieved an AV Preeminent Rating from Martindale-Hubbell, which used to publish actual physical books listing lawyers.

Zach designated himself a “thought leader” a while back, but he does actually have the writing and presenting experience to back it up. He has given dozens of continuing legal education presentations to other Texas lawyers on numerous topics including non-compete law, trade secrets law, and social media ethics for lawyers, just to name a few.

Zach is also a longtime member of the Garland R. Walker American Inn of Court in Houston, an organization of lawyers, judges, and law school students that promotes professionalism and excellence in the legal field. He currently serves on the Inn’s Executive Committee.

Zach is active on social media, especially Twitter and LinkedIn. Just don’t take his tweets too seriously. As his Twitter bio states, his interests outside of law include jazz, the Dallas Cowboys, and trying to do more handstand pushups.

He also likes spending time with his wife, the lovely and famous Mrs zachwolfelaw, and his kids. His daughter Hailey is a triple threat who studies musical theater at the University of Central Oklahoma. His son Eric is in 8th grade and is one of the smartest and funniest kids you could meet.