The Problem With “The Most Successful People”

There is a story about a lady at a dinner telling President Calvin Coolidge she had wagered she could get the President to say more than three words. Silent Cal’s famous response: “you lose.”[1]

In the summer of 2018, social media was abuzz with “the most successful people I’ve met” posts. Apparently it started with this tweet from a guy calling himself Pomp: 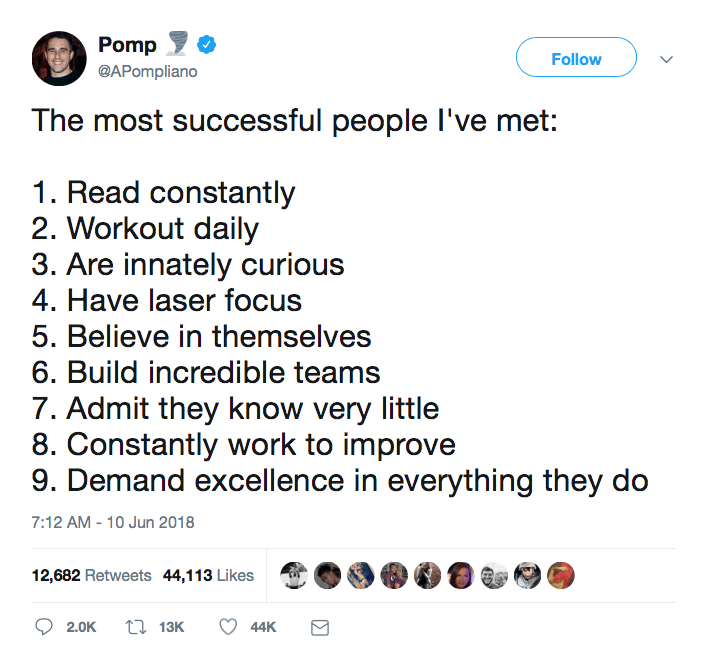 Naturally this led to people posting their own lists. These fell into two categories: (1) earnest attempts to make a better list and (2) parodies.

Some parodies were funnier than others, but with thousands of people weighing in, the funniest ones were pretty darn funny. Twitter at its best.

I didn’t have an immediate tweet of my own, but my thoughts on “successful people” eventually morphed into a blog post called Successful Blogger Shares Secrets of Morning Routine. It was classic me: half-joking, self-deprecating, not really that funny.

But now I want to share my serious, deeper thoughts about this “habits of successful people” thing. If you’re like me, you probably want to be “successful” (whatever that means), and you like good tips on how to succeed. So does the recent “successful people” episode have any lessons of real value?

Let’s start with the list that kicked off the tweetstorm. It’s easy to make fun of it, and I am not above doing that, but does it contain any true insight?

So let’s start by giving Pomp his due. We can concede that it’s good to do the things on his list. We can even acknowledge that most successful people do most of those things.

Now, with that out of the way, let the snark begin.

Many people pointed out the fact that successful people often have a head start: 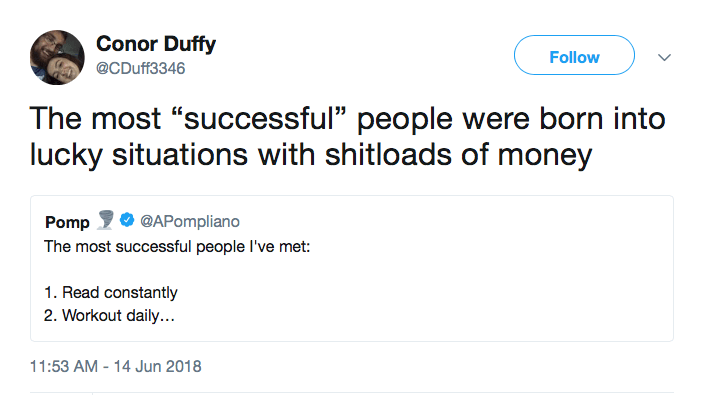 Others highlighted the fact that “successful” people can be selfish jerks: 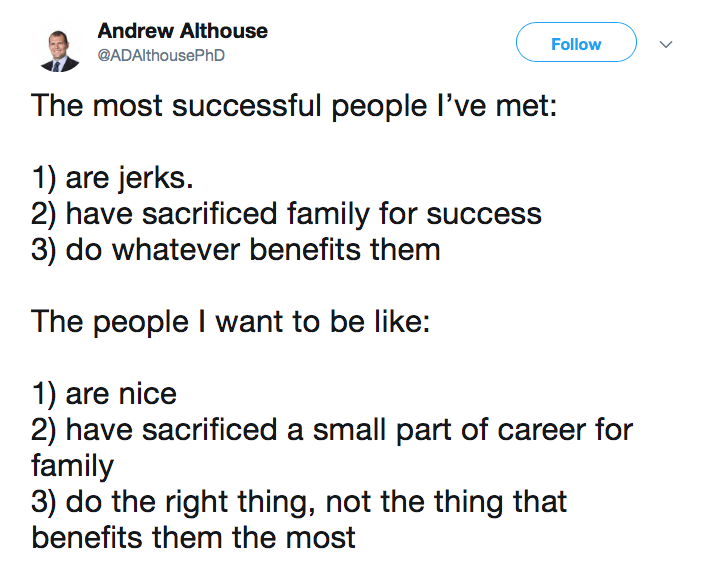 And some redefined success to favor cats and fuzzy fictional children’s characters: 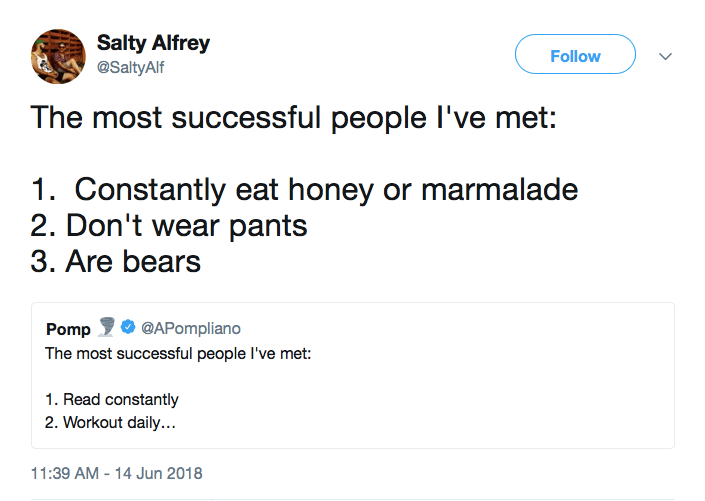 But for me, the funniest ones were the absurd non sequiturs: 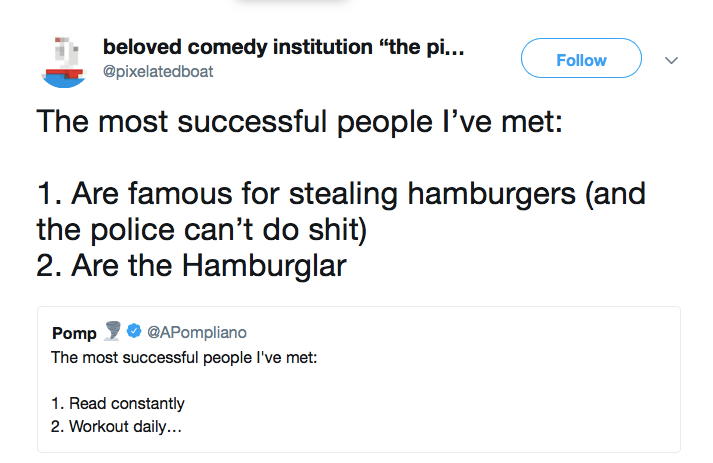 Jokes aside, there are also serious critiques. For one thing, many traits people put on these lists are tautological, i.e. true by definition. Saying that successful people “build great teams” or “demand excellence” is only slightly more insightful than saying “successful people tend to be very successful.”

But there’s a more fundamental problem. This tweet pointed it out: 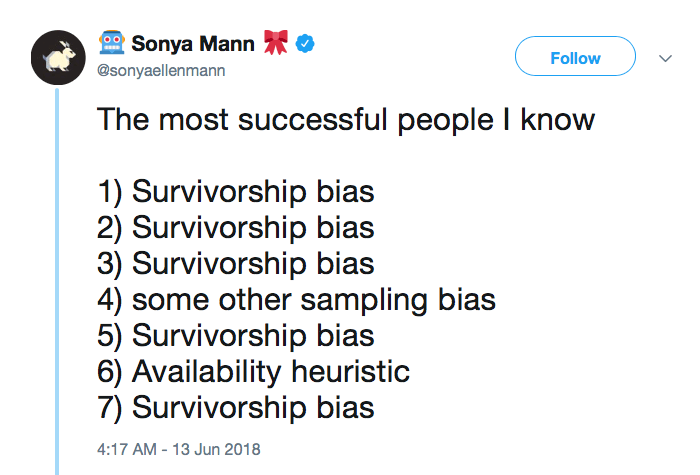 Survivorship bias is the logical fallacy of looking at the characteristics of people who survived some selection process and ignoring the people who did not. It is a form of selection bias.

This gets to the correlation versus causation problem. Let’s take another example. Does working out every day cause you to succeed? Or perhaps highly successful people have some other characteristic that explains both why they make partner at age 29 and the fact that they never miss their 5 am spin class.

If you really wanted to be scientific about it, you would identify a certain habit—such as reading a book every week—and you would compare a randomly selected group with that habit to a randomly selected group without that habit. Ideally, each group would be exactly the same but for that one characteristic. You would then see if the book-reading group was more successful than the group that watches The Bachelor every week.

Of course, this is virtually impossible to do in real life, which is why social science will never be as “scientific” as laboratory science.

No, understanding the secrets to success requires wisdom, not double-blind clinical trials. The scientific method has its limits.

And while the average individual is not very wise, there is a certain collective wisdom that can emerge from a community. Case in point: the nuggets of wisdom that can be panned from all the “successful people” parodies in the Twitterverse.

Just to name a few:

Wait a minute. One of these nuggets is not like the other. The last point—success isn’t everything—calls into question the whole premise.

If you define success as becoming a billionaire, a professional athlete, or a rock star, then your chances of success are pretty low. But if “success” for you means loving your friends and family and treating people well, your chances increase.

This is undoubtedly true, but it kind of dodges the question. What if we change the question to “what practice will help you succeed in your business or career?” That’s less important than “what is a meaningful life?” but still important.

And that brings me back to Calvin Coolidge. Here’s something we know he really said:

Nothing in this world can take the place of persistence. Talent will not: nothing is more common than unsuccessful men with talent. Genius will not; unrewarded genius is almost a proverb. Education will not: the world is full of educated derelicts. Persistence and determination alone are omnipotent.

My dad shared this quote with me years ago, and aside from the political incorrectness (we wouldn’t say “men” and “derelicts” today), it’s pretty good advice.

It’s also a great example of what I call “dad” advice. I don’t necessarily mean advice from my dad, and dad advice could come from anyone (including a mom). Personally, I’m more prone to make a dad joke than to give dad advice, but I have two kids of my own now, and on occasion I find myself dispensing some dad advice.

Dad advice has two main characteristics: (1) it is somewhat obvious, and (2) it is not fun.

This is dad advice. It’s kind of a downer.

If it wasn’t obvious, it would come from an expert, like Tony Robbins, not your dad. If it was fun, everyone would do it.

Persistence is like that too. It’s boring. But here’s the good news: it works. Recently I had a small but significant achievement that resulted from a couple years of steady effort. It really brought home to me the importance of persistence.

So yeah, the most successful people I’ve met are persistent. And most of them don’t wear the same thing every day.

These are his opinions, not the opinions of his firm or clients.

[1] The “you lose” story is probably apocryphal, but like most great stories, if it didn’t really happen it should have. 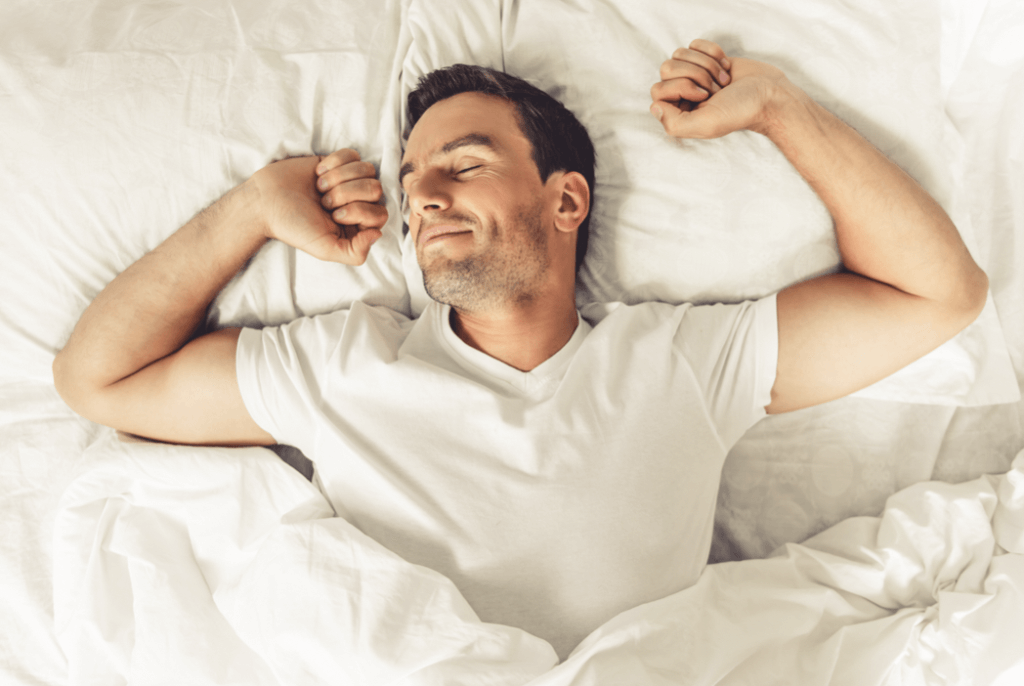 Good stuff. Congrats and keep up the good work.