Force Majeure Is Nice, But Have You Tried Impracticability?

One trick I learned early in my litigation career was what the witness can say when the lawyer asks, “ok, but is it possible that ____?”

Sure, it’s flip, but it’s effective. This answer succinctly points out the folly of the question. Getting a witness to say it’s possible that some event happened doesn’t really prove anything. In litigator lingo, it’s “no evidence” that the thing actually happened.

But is it true that anything is possible? Sometimes performance of a contract will become impossible after the parties sign it. This has become even more apparent in the COVID-19 era.

Suppose you own a hotel in the Houston area, where I practice law. You sign a contract with the Texas Knitting Association to host their annual knitting blowout. The contract calls for the hotel to provide a ballroom, three meeting rooms, and catered meals for a three-day convention. The TKA expects 500 members to attend.

But of course something goes wrong. The COVID-19 pandemic hits Texas with a wallop. Both the Governor of Texas and the Mayor of Houston issue emergency declarations.

Then, the week before the knitting convention, the Director of the Houston Public Health Authority notifies the Mayor that the risk of COVID-19 spreading at large in-person gatherings is high. He says a convention presents a “clear and present danger to the health and well-being of convention attendees, workers, local hotel and restaurant owners and Houstonians because of the surging pandemic.” The Mayor recommends that Houston hotels cancel large conventions.

So, the hotel manager emails the head of the TKA. “I’m sorry, we must cancel the convention because of the pandemic situation.”

But this hotel messed with the wrong people.

The knitters swing into action and call their aggressive Houston lawyers. The lawyers file suit asking a Houston judge to order the hotel to host the convention. They claim the breach will cause “irreparable injury” because there’s no time to find an alternate venue, and this may be the last chance some of their members ever get to attend.

Did the hotel breach the contract? Does it have a good defense to the lawsuit? Let’s break it down.

The general rule in Texas is that a deal’s a deal. Impossibility of performance does not excuse a breach of contract:

So there you have it. If you want to use a subsequent event as an excuse to get out of the contract, you should have put that in the contract. If performance becomes impossible, too bad so sad.

But wait, my loyal Fivers say. What if the parties did put that in the contract? What about a force majeure clause, which you deftly explained in your viral blog post Use the Force (Majeure).

Use the Force (Majeure Clause)

A force majeure clause is a defense to a breach of contract claim if:

1. The event at issue is one of the events specifically enumerated in the force majeure clause

2. The event at issue is within the scope of the “catch-all” clause AND was not reasonably foreseeable to the parties (?)

3. The event caused the breaching party’s failure to perform

4. The breaching party complied with any notice requirements of the force majeure clause

Setting aside that complication, let’s apply these elements to our Houston knitting convention.

Was the event at issue expressly enumerated in the force majeure clause?

Let’s assume for our hypothetical that the force majeure clause expressly refers to “epidemics,” as follows:

But that’s not all! Let’s suppose that after the pandemic hit, the knitting association and the hotel signed an addendum containing this “supplemental” force majeure clause:

I think that gives us a pretty clear answer to element 1. Under our hypothetical, the force majeure clauses specifically refer to the very events that the hotel cited as force majeure events. We don’t even have to look at the catch-all clause under element 2.

So we go to element 3: did these events cause the hotel’s failure to perform?

The answer seems to be yes, but let’s muddy the hypothetical a little. Suppose that a week before the Mayor recommended canceling hotel conventions, he found out that the president of the knitting association made a big campaign contribution to the Mayor’s opponent. The knitters claim in their lawsuit that the mayor didn’t make his recommendation for legitimate public health reasons, but to get back at the knitters.

That might at least present a factual dispute about causation.

If these facts ring a bell, it’s probably because I’ve loosely based them on the litigation over the 2020 Texas Republican Party Convention. The force majeure clauses cited above are taken directly from the contract the Texas Republican Party signed with Houston First, the corporation that operates the massive George R. Brown Convention Center in Houston.

I got pretty excited when that case hit the headlines, because I was scheduled to co-present a continuing legal education course on force majeure issues. But the case, for all its craziness, was kind of a letdown, at least as to force majeure issues. As we’ve seen, whether the pandemic was a force majeure event was not even a close call. It was right there in both the original contract and the addendum.

The harder question was the “pretext” issue, i.e. the allegation that the Mayor caused Houston First to cancel the convention for political reasons, not because of the pandemic. In theory, that allegation could negate the causation element of the force majeure defense.

But in practice, that argument was a pretty hard sell, considering the unprecedented nature of the COVID-19 epidemic and the fact that cases were spiking right around the time of the convention. Two state district court judges and the Texas Supreme Court didn’t seem to buy it. The only judge who did was U.S. District Court Judge Lynn Hughes, who ordered the convention to proceed. But the Fifth Circuit Court of Appeals quickly stayed that order, and then sat on the case until it effectively became moot.

It seems the only lasting effect was to give thought leaders like me a fun hypothetical.

My takeaway for private disputes is that you can make the pretext argument if you represent the party trying to enforce performance, but you’d better have some really strong facts to support it, especially where there’s no question that an enumerated force majeure event occurred.

But that’s really just the first half of the story. Let’s suppose our contract between the hotel and the knitting association doesn’t have a force majeure clause at all. Is the hotel stuck with the obligation to perform?

This is where the impracticability defense comes in. Think of it as an implied, non-contractual force majeure clause.

As we saw earlier, the general rule is that impossibility of performance is no excuse. But there’s an exception. Section 261 of the Restatement (Second) of Contracts states as follows:

Where, after a contract is made, a party’s performance is made impracticable without his fault by the occurrence of an event the non-occurrence of which was a basic assumption on which the contract was made, his duty to render that performance is discharged, unless the language or the circumstances indicate the contrary.

Of course, the Restatement isn’t binding on a judge. It’s basically just an attempt by legal scholars to consolidate and “restate” what a bunch of courts have said. But the Texas Supreme Court did cite Section 261 favorably in Centex Corp. v. Dalton, 840 S.W.2d 952, 954 (Tex. 1992).

But what does it mean? In typical Restatement fashion, Section 261 is dense, awkwardly worded, and contains the familiar pragmatist escape hatch “unless the language or the circumstances indicate the contrary.”

Let me see if I can put it in plain language: If a basic assumption of the contract unexpectedly becomes untrue, it wasn’t your fault, and you can’t perform your obligation as a result, then you’re excused from performing. That’s the general rule of “impracticability.”

Applying this to our hypothetical, the hotel would have a pretty strong impracticability defense. It was a basic assumption of the contract that holding a convention in the hotel would not threaten public health or run afoul of emergency orders from state and local governments. It wasn’t the hotel’s fault. And the result is that it’s impracticable for the hotel to perform.

(1) the death or incapacity of a person necessary for performance

(2) the destruction or deterioration of a thing necessary for performance

You can remember these three things if you just think “death, destruction, and taxes.”

Even in these situations, the party trying to avoid performance must show it used reasonable efforts to surmount the alleged obstacle to performance. See id. at 69 (citing Restatement (Second) of Contracts § 261, cmt. d).

Texas courts have also recognized some typical scenarios where the impracticability defense does not apply. Those include:

Comparing the categories of events that can establish impracticability with these events that do not, you can see a theme. Just like we saw with force majeure clauses, courts applying the impracticability defense are skeptical of economic excuses for a failure to perform. The fact that performance has become more expensive is usually not going to cut it.

Unless the facts or circumstances indicate otherwise. Anything’s possible.

When is a contract “unconscionable” under Texas law? 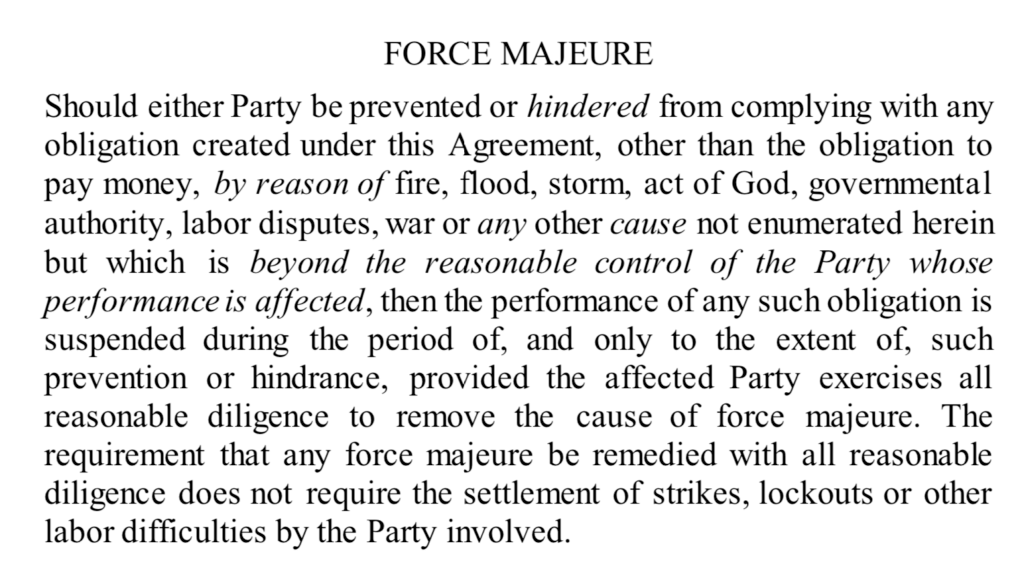 Use the Force (Majeure)