Let’s set aside the politics of the Brett Kavanaugh Supreme Court confirmation hearings for five minutes (as if that were possible). What can litigators learn about effective cross-examination from Senator Kamala Harris’s grilling of Judge Brett Kavanaugh about a possible discussion of the Mueller investigation with a law firm that represents Donald Trump?

The reviews of Harris’s performance were all over the map. Some gushed over the former prosecutor’s toughness and cross-examination prowess. Others, especially fellow litigators, scoffed like she was an amateur. (I imagine the latter is similar to the way jealous stand-up comedians review each other.)

And strangely enough, the varied reactions to the Senator’s technique tended to correlate with the political views of the reviewer.

But let’s put aside the fact that Harris is a liberal Democrat with presidential ambitions and Kavanaugh is a conservative Republican who could tilt the Supreme Court rightward for a generation. Let’s just look at it as a lawyer cross-examining a witness. What can we learn?

First let’s recap what happened. As you can view here, Harris asked Kavanaugh if he had ever discussed the Mueller investigation with anyone at the law firm Kasowitz Benson & Torres, the law firm founded by Donald Trump’s personal lawyer Marc Kasowitz.

Kavanaugh, thinking Harris must have some kind of information on such a discussion, stalled for time. “I would like to know the person you’re thinking of,” he said. Harris kept pressing, without revealing the name of the person she had in mind. Eventually, Senator Mike Lee jumped in to try to rescue Kavanaugh. When Harris resumed the questioning, Kavanaugh continued to avoid giving a direct answer.

This is a familiar scenario for litigators. It often happens in depositions. The lawyer asks a pointed question that is specific enough to imply the lawyer has the goods on the witness, but open-ended enough not to suggest the answer. This makes the witness squirm. “What does she have on me?” the witness thinks. Afraid of giving an answer that could easily be impeached, the witness bobs and weaves. If the lawyer keeps pressing, eventually the witness’s lawyer jumps in, even if that’s a violation of the rules.

So the Harris-Kavanaugh exchange provides a teaching moment. What do we think of Senator Harris’s cross-examination technique? And what can we learn from Judge Kavanaugh’s answers, or non-answers?

Let’s start with the Senator. So much depends on what she really has on Kavanaugh, if anything. If her question was based on pure speculation or rumor, then I would have to give her performance a C-. Because if she doesn’t really have any evidence of the discussion, then the whole episode will ultimately just hurt her credibility.

Yes, in the short term she created some doubt about Kavanaugh’s credibility—that’s why I wouldn’t give her an F—but if she can’t back up her implied accusation the court of public opinion will eventually ask “what was the point of all that?” You don’t want to get the jury excited about some juicy fact and then fail to deliver.

But let’s assume for the sake of argument that Senator Harris does have some specific, credible evidence that Kavanaugh had some substantive discussion of the Mueller investigation with a lawyer at Kasowitz. That would change things.

Then the evaluation would shift to the question of timing. When would be the best time for Sen. Harris to reveal the evidence she has?

Some observers skewered Harris for not immediately impeaching Kavanaugh with evidence. And perhaps they were right that the best time to bring it up was immediately.

But I think it’s wrong to assume that waiting was a mistake. Trial lawyers often have to make this kind of judgment call. The argument for bringing up the impeachment material immediately is that you want to score points while the issue is fresh on the minds of the audience. If you wait, the audience may forget the issue or worse, assume you never had anything on the witness in the first place.

But there are also good reasons to wait. The best one: You may be able to offer the impeachment evidence when it is too late for the witness or his lawyer to try to explain it away.

Let’s say in a civil lawsuit a witness testifies “no, I never emailed my customer list to anyone outside the company.” Suppose such an email comes into evidence later. Imagine the lawyer waits until closing argument to show that email to the jury. “Remember when Dawn Davis said she never emailed her customer list,” the lawyer says in closing, “I guess she conveniently forgot about this one.” What can Dawn say at that point?

So I have to give Sen. Harris an I for “Incomplete” on her strategy. Time will tell.

But of course it’s not just about strategy, it’s also about technique. For demeanor and tone, I give Harris an A. She was persistent without overdoing it. She didn’t let Kavanaugh or Lee get her off track. Her tone was dry, and her facial expressions said it all. “Be sure about your answer, sir,” she deadpanned with a skeptical look.

I liked her tone. But I’ll admit this is the most subjective part of the grade.

And of course, even the best cross-examination technique can be thwarted by a good solid answer. So how do we grade Judge Kavanaugh’s response? Again, so much depends on what the real answer is.  As I tweeted that day:

Is there one I’ve missed? Let me know.

Kavanaugh started ok, saying “I’m not remembering,” but then he got more defensive, asking twice if Harris would tell him who she was thinking of, and then saying he was trying to think if he knows anyone at that firm. If he really didn’t remember, why not just stick with that and end the questioning there?

One possibility—consistent with possibility 3—is that Kavanaugh could not answer the question because Washington is crawling with lawyers, the Kasowitz firm itself has over 200 lawyers, and Kavanaugh cannot be expected to know the firm affiliation of every lawyer he talks to. This was essentially what Sen. Lee interrupted to suggest to the witness and the public.

In litigation, jumping in like this generally violates the rules, but I get it. Sometimes as the lawyer for the witness you just have to do it. (It’s only consistent with the rules if the questioning has crossed the line into harassment.) But if you’re the lawyer for the witness and you intervene to suggest the answer, the answer you suggest should at least be credible.

And the answer Sen. Lee suggested just wasn’t that persuasive. Are you telling me that a judge on the D.C. Circuit Court of Appeals—a court likely to hear some appeals arising from the Mueller investigation—has had so many conversations with people about the Mueller investigation that he can’t remember if one of those conversations was with a lawyer who works for a law firm that has represented Trump?

I don’t buy that. But in fairness to Kavanaugh, it’s certainly possible that he didn’t know for sure. 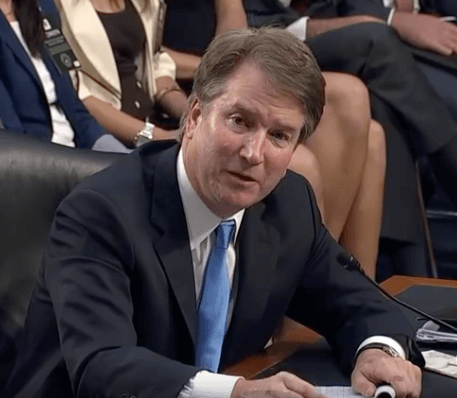 Without knowing which possibility is the truth, I’ll give Kavanaugh’s response a C. He doesn’t get an F, because at least he didn’t give a direct, dishonest answer. That would be the worst thing to do.

But his equivocating was not the best approach. It made him look like he had something to hide—even if he didn’t. And it instantly highlighted the issue as important. Instead of questioning the questioner—and inviting a debate—why not just give a simple answer?

That doesn’t mean you should trust your memory too much. There is no need to go out on a limb and say “I absolutely never spoke to anyone at that firm about Mueller a single time in my life.” But if the honest answer is “I don’t remember talking to someone at that firm about it,” then just say that. At that point you’ve taken the sizzle out of the question.

So it turns out the Harris-Kavanaugh episode doesn’t just give us a lesson on cross-examination. It teaches us something about witness preparation too: The simple truth will set you free. 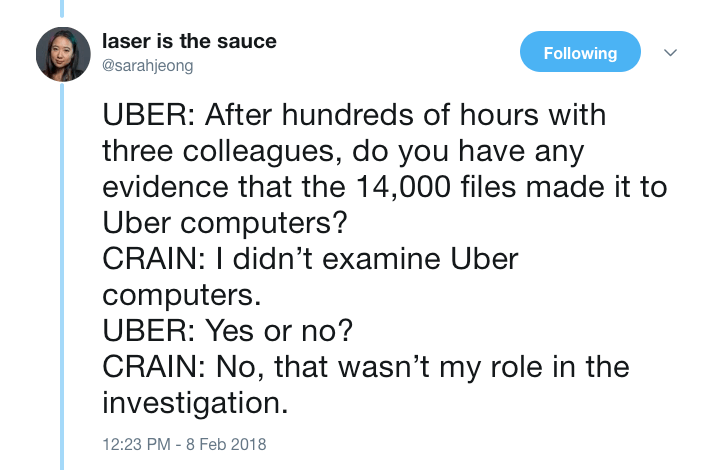